No collection of photos of south-east Brazil would be complete without this almost mythical species. A member of the tapaculo family this bird's ability to stay hidden is legendary. Its song is far reaching, yet as you approach it doesn't seem to get any louder. The peculiar rhythmic, low peeping sound, not unlike that of the warning signal of a reversing vehicle, fills the airspace around the observer making pinpointing the bird's position difficult. The bird rarely flies from one bush to another, preferring instead to creep down one tree or bush, pass inconspicuously along the ground through the dense undergrowth which typifies its habitat and then creep seruptitiously up the next tree or bush. 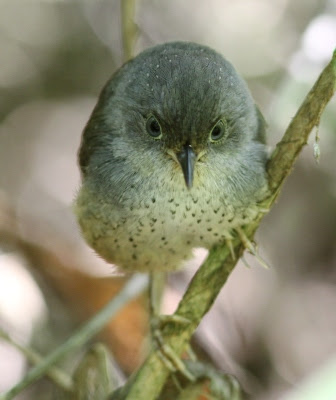 Having said all that, it can be very confiding, trusting in its ability to stay undetected, it will often approach to within inches of a motionless observer in the right habitat. It took a great deal of patience and observation for Elis to eventually get intimate photos like this one of the Spotted Bamboowren.
Postado por Rick Simpson Birding às 06:26