Despite the lack of birds in the garden (although I added a fly-over Skylark today garden list No. 18) our little patch of England is apparently rather attractive to hedgehogs.

We put some food out one night to see if any passing hedgehogs would be tempted, the food had mostly gone by the morning, but we were unsure if the hedgehogs themselves had been or whether one of the many cats hereabouts had helped him or herself to our al fresco smorgasbord.

Elis then set about creating a hedgehog hotel, a wooden box for the animals to hibernate in should they feel so disposed, which was then filled with loads of snuggly dry leaves.
She then set up a hedgehog restaurant using a design she had seen on the internet, constructed quite simply from a plastic container with a hedgehog sized hole cut in it. Being transparent you can see if any animals are in there availing themselves of the food. Again we set up the camera trap, but this time inside the container, we saw a cat come by and sniff around, but he was thwarted by our cunning plan and then not only did we see a hedgehog inside the restaurant eating away, we saw two at one point, hedgehog junction!

Last night in the bitter cold we actually saw one with our own eyes for the first time and he sat and ate to his heart's content.

Once he had had his fill he squeezed past Elis (that brown blob is her knee), shot around the corner and into the hedgehog hotel! Result!

Hedgehogs need our help and we are thrilled to be able to do something positive for our local population.
Postado por Rick Simpson Birding às 14:39 No comments:

Last night we found a large flock of about 200 lapwings just outside town and with them were 10 golden plovers, we scanned the flock by failed to find and Caspian, Sociable or White-tailed Plovers. It was late, blowing a hooley and freezing cold and the rather dull as well, so the photos weren't brilliant, just a record shot really.
﻿ This morning the sun was shining, so we went for better shots. Do you think we could find any lapwings or plovers? Not a one. We did admire the autumn leaves in Salcey Forest (we weren't looking for plover there just passing through of course) and came across at least two Common Buzzards together.﻿

Also heard Pied Wagtail flying over the garden this morning but didn't see it until it was a dot in the distance, so taking the garden list to 17.

It is less than 2 weeks until the epic Wader Quest starts, can't wait actually, truth be known. the problem is there is so much still to organise. I have spent a week convalescing after a hernia operation, no driving allowed; however I will now be able to get out and about again, so hopefully we'll get to do a bit of birding and leave the organising behind for a day or at least a morning!

As the garden list is so pathetic, we need to do something to improve it. So the plan is to make it more bird friendly in the hope of encouraging more birds to stop by. The list did stumble up to a magnificent 16 yesterday with a Dunnock on the fence, but even he dropped down the other side! Other recent additions were a fly-over Buzzard and a calling Chaffinch.
So something needed to be done and a planting session took place. Me supervising (just how long can I stretch out this hernia thing?) and Elis doing all the elbow grease as usual. We planted a few hawthorns, an elderberry and a wild rose in the hope of building a mini hedge along the side of the garden. OK, it'll take time, but it'll be fun to work up the list and know that it is because of what we are doing that these birds are there. We have proved that few bird visit the garden automatically, and now we have to create a bird garden from scratch.

Last weekend we had the pleasure of being visited by the next-big-thing-in-birding, my grandson Leon, and his not-quite-so-keen-on-birds mother, my daughter Anna; it was Leon's birthday. At the same time we had my parents over and thus had four generations together.
It was really good to have them all over for the first time to our new home, lets hope it'll be the first of many such occasions.
Postado por Rick Simpson Birding às 12:37 No comments:

As winter creeps up on us and the wind begins to bite, we find ourselves thinking more and more about those heady, hot and humid, halcyon days back in Brazil. When I say halcyon, I of course, am referring to the climate and scenery and not some of the unpleasant characters who lived in our quiet idyllic town.

One of the things that we most enjoyed doing when the stress all got too much was to buy an ice cream and sit by the sea watching the Brown Boobies waft around the bay and plunge dive into the sea for fish. 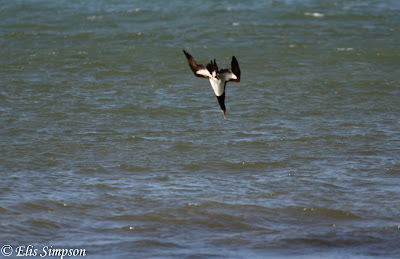 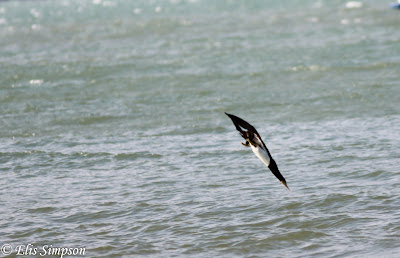 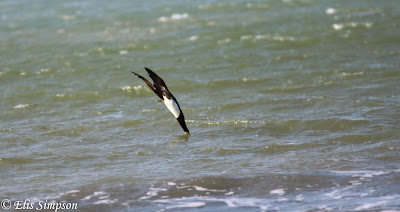 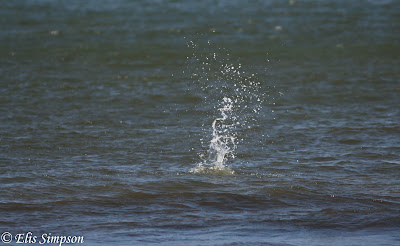 We are renting a house in Roade in Northamptonshire, a small village surrounded by farmland. When we arrived it didn’t look too promising in terms of bird life, there were no plants in the garden at all.
We set up our feeders as soon as we could, but even after a week we had had exactly two visitors, a male and a female house sparrow that came separately.

A short while later we went out and bought some plants, a few flowers to make the place look more colourful and attract insects and a tree which we planted in a pot for now and placed near to the feeders. The feeders were in the open and the surrounding gardens had few tall trees to provide a safe path to them. Birds are reluctant at first to dive straight in to feeders for safety reasons. So this small  flowering cherry tree was placed alongside to give them some confidence.

It must have worked as we soon had a regular  juvenile goldfinch and a short visit by an adult. The Woodpigeons and Collared Doves started to come and a couple of Magpies. So things are starting to get moving and now that the starlings have found the fat balls they come regularly.

At the front of the house we hung a single feeder from the eaves of the bungalow and it has been visited by just one Greenfinch so far, across the road they had done the same before we came and seem to get a few more there, perhaps they increase. Strange that these birds don’t come to the back garden where there are more feeders, they must fly overhead from time to time.

We have heard tits and Robins in the surrounding gardens, but as yet they have not found us.

Fly-overs include Jackdaws, Rooks and Carrion crows, plus a huge flock of Black-headed Gulls one day, a couple of possible fleeting buzzard sightings plus a sighting of two that must have flown over the house while we were coming home in the car and even more amazing a brief view of what may have been 5 cranes flying over! We shall never know.

We also are blessed by the visits of a hedgehog at night, something that Elis is very pleased with, she loves them to bits. We thought we had one coming, but set up a camera trap to prove it.

We will continue to try and build a more bird-friendly garden and keep you posted as to the news of our visitors. I’m not expecting numbers like we had at the apartment in Ubatuba though, where the list reached 101 in the end! As it stands today, the list here has 13 confirmed species. Black-headed Gull, Collared Dove, Woodpigeon, Robin, Blackbird, Magpie, Rook, Carrion Crow, Jackdaw, Goldfinch, Greenfinch, House Sparrow and Starling.
Postado por Rick Simpson Birding às 13:08 No comments: 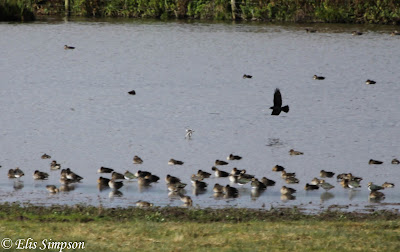 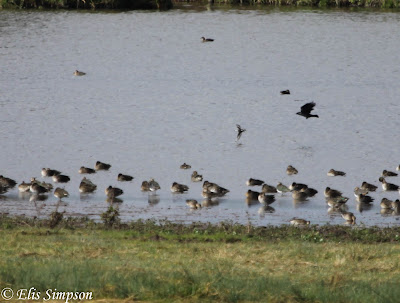 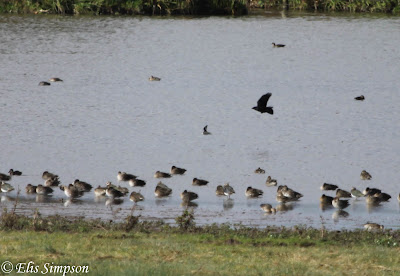 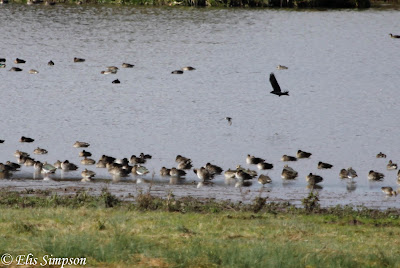 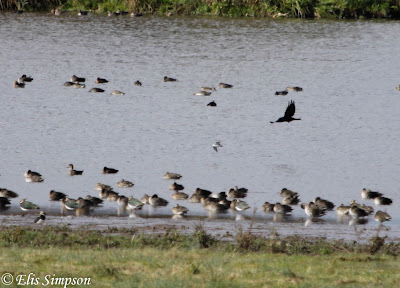 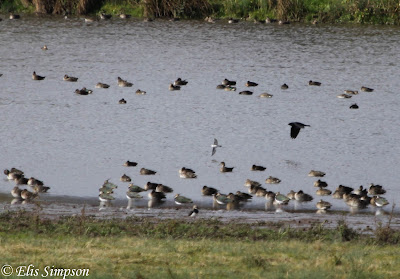 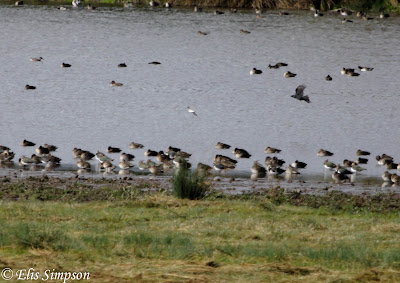 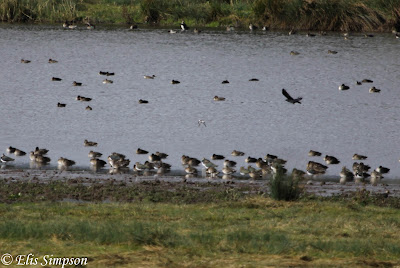 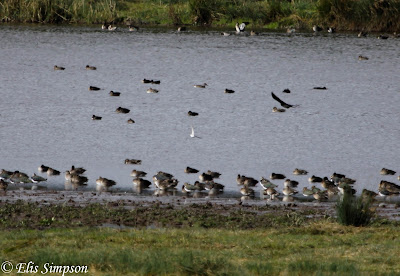 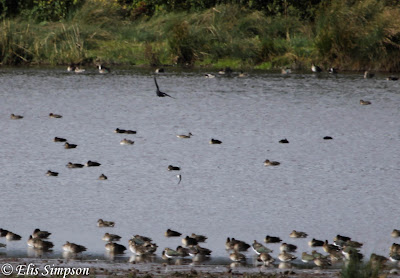 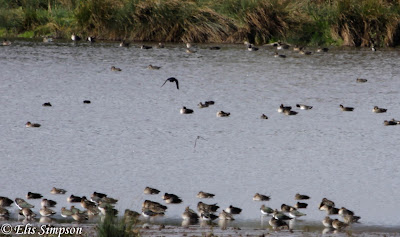 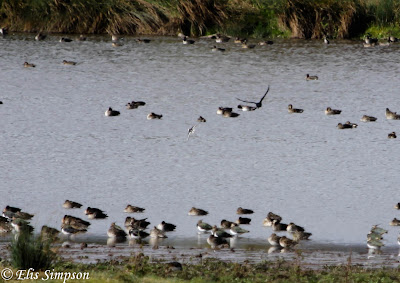 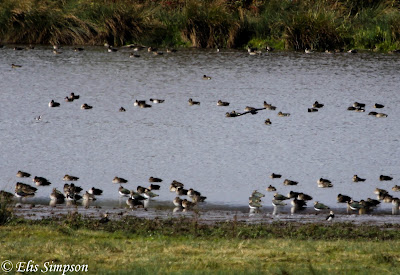 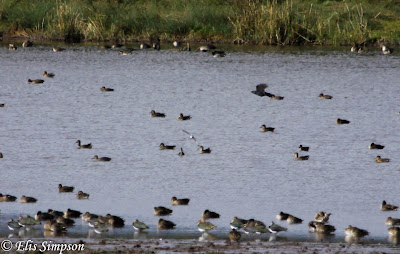 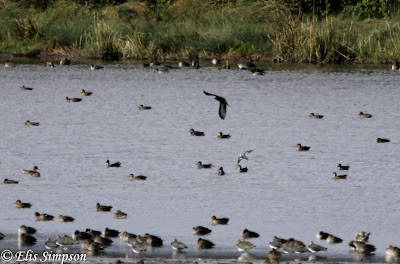 To get a break from the stress of trying to arrange Wader Quest and banging my head against many brick walls, worrying about why people just don’t return e-mails instead of saying they can’t help so I can move on etc. We decided a day out was required, and as there was a tick for Elis in the form of Red-necked Phalarope at Slimbridge, we set off in that direction in the company of Gyorgy Szimuly (Szimi). The Long-billed Dowitcher was also still around so we looked for it at the usual place. It wasn’t there, but we learned that the phalarope had been seen, so went after that in the Zeiss hide. It was very distant as you can see from the photos but at least it was there.
We were disappointed not to see the Long-billed Dowitcher (which was later seen elsewhere) as we had hoped to see both dowitcher species on the same day.


The second part of the plan was to stop on the way to Weymouth to see the Buff-breasted Sandpiper near Taunton, but there was no news so we shot by and arrived at Lodmoor in a downpour.

Undaunted (this was a lifer for Szimi) we set off in pursuit of our quarry. As is always the case with long staying rarities, the interest had dwindled and what with the rain, no-one was there to help us look. We did stop and speck to one chap who said he hadn’t seen it. Szimi and I went to where Elis and I had seen it before, Elis busied herself taking photos of any bird that would sit still long enough. We scanned the reed edge and waited for it to emerge.

The chap we had spoken to earlier came up and asked if we had seen the dowitcher, we said no, but that we were canning the reed edge constantly.


“I wouldn’t bother” he said “it’s out there in the open!” And so it was! How did we not see that? We were slightly exonerated when the chap said it had just flown in.
We then spent an hour watching the bird that was showing well, but Elis was nowhere to be seen. The bird then flew to the far side of the pool, just as Elis arrived with her camera. She got more record shots, but it was further away than last time!

A bit closer were some Mediterranean Gulls in various plumages.


﻿﻿We had a quick look at the sea but only saw some distant Gannets and then bimbled back to HQ. A great day all-in-all.﻿