As mentioned in the dualling raptors and crow blog, we had three more new birds including our first Long-tailed Tits. These birds are always a welcome sight and jointly, along with Northern Lapwing, hold the accolade of my favourite bird. There was a small family party which included this youngster.


and the male is coming more often too...


today he brought along with him a young bird which sat on the fence while he fed it.


A Blue Tit was doing the same on the feeders.


Other young birds in evidence included this Greenfinch.


Other regulars to be good enough to pose for photos recently are the Dunnock, Blackbird and fine pair of Goldfinches.

I do love living in our little rose covered cottage.

Crows on the attack.

We sometimes get raptors flying over the cottage, a real treat for me as there were precious few about when I was a nipper. Today we had a new raptor species for the garden in the form of a Hobby although Elis was unable to get pictures of its short but sweet appearance, maybe next time? We have been half expecting this species as they are not that unusual in this part of England. This takes our garden total on to 58 with another new bird yesterday, a Pochard on the lake, and yet another, Long-tailed Tit, the day before that.

Anyway, the point of this blog was to show you the excitement that Elis captured the other day when a Common Buzzard flew over and a crow took exception to it...

Then, later the same day when a Red Kite came over the over confident crow was off again.

It doesn't do to mess with the raptors around here I can tell you.
Postado por Rick Simpson Birding às 13:54 No comments:

A twitching we will go.

Irresistible; Spectacled Warbler in Norfolk and a lifer for Elis, plus a decent weather forecast. It was too much to bear, so we set off early and arrived around 08.00.


The mile or so walk out to where the bird had been seen was pleasant enough and we enjoyed some waders with young, Redshank and Lapwing to be exact, and there were plenty of other birds singing along the hedgerows to keep us smiling and amused including a calling Quail.

When we got to the site there were only 9 people assembled and we soon saw the bird as it collected nesting material.


It seems this bird is making a second nest having finished the first one yesterday, but alas all in vain I fear.


The only other one of these I have seen in the UK was back in 1992 when there was one at Filey. I have also seen them in the Canary Islands, Spain and Cyprus, but not with Elis. The bird popped up to sing every now and then but you had to be quick as it soon dropped back into cover.


We also had four Spoonbills fly over, I must admit my heart gave a leap when one of the crowd shouted "4 spoonies flying over!" my mind going back to Thailand. There was also a, what has now become commonplace, Little Egret on the marsh. I still can't get used to seeing these birds everywhere in the UK, even from my living room window, having had to twitch one in my early listing days in the 1980s to get one on my UK list.


Once we had had our fill of the bird we left the now swelling group of 40 or so people and had our fill at a cafe (full English with a mug of tea)... 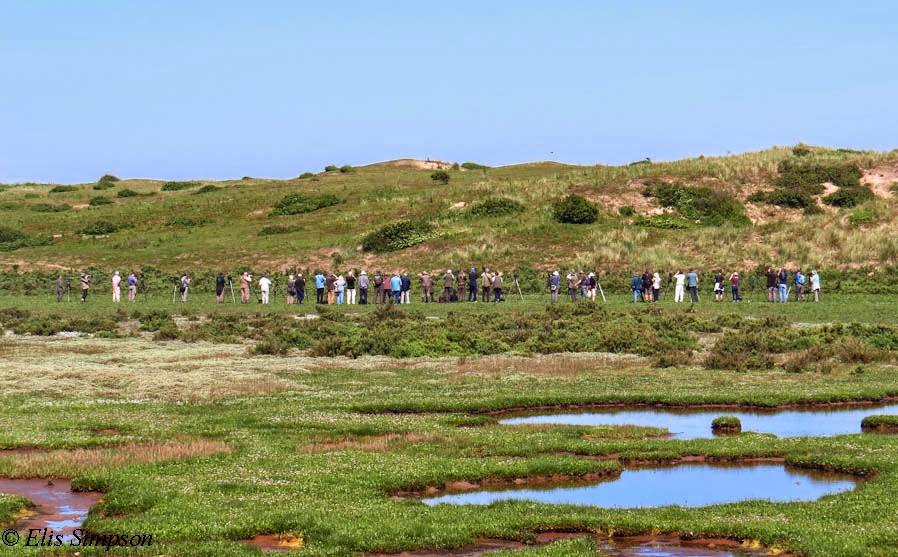 ... and then headed for Titchwell which was disappointing except for three drake Red-crested Pochards. 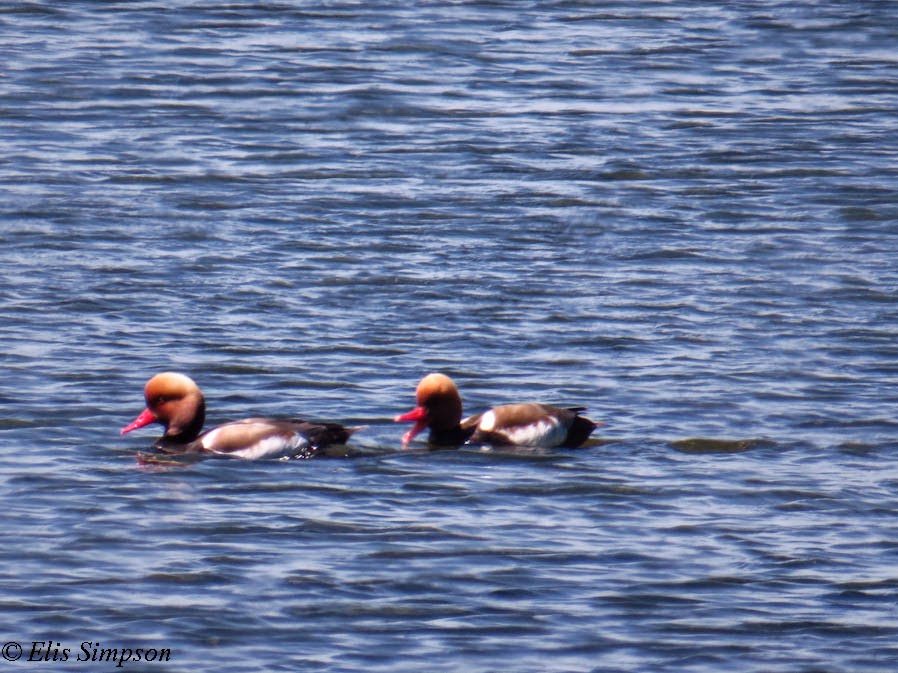 So we headed home taking the back road through Docking, along that road we had Lesser Whitethroat and Corn Bunting not birds we see every day in our neck of the woods.

There has been a lot of racket around our house today. The sound of scolding wrens being chief among the causes. The reason for this noise? Chicks! It seems that the wren family is having its first outing. Mum and Dad are understandably anxious and the kids hungry.

We are not sure where the nest had been, but they were first seen in a flowering current bush outside our window where we had placed an upturned pot in the hope of attracting a pair of wrens to nest. Not sure if they used this or came from elsewhere, but it was good to see them especially as one of the Blue Tit nests has failed.


We have been keeping our eyes on the Jackdaws that come to the garden to feed. Two sets of adults have been seen to collect beaks full of food and head off in opposite directions so presumably have nests, two head off one way and two the other. We have been keeping vigil to check they don't go off with a baby wren in their beak instead. The two couples seem to be quite happy to feed alongside one another with little or no aggravation.


We stopped seeing the adult Blue Tits coming and going and there was no sound from inside the box, so we took a peek and were dismayed to find seven dead chicks, all quite small, and an unhatched egg. We emptied the box and prepared it in the hope that next year we'll have more luck.


The sparrows continue to come sporadically and the Great Tits have started bringing their young to the feeders.

The Song Thrush that we have been hearing for so long without seeing has a new song post that can be seen from the kitchen reducing the number of 'H's for heard-only in the daily log.