My book is published at last! 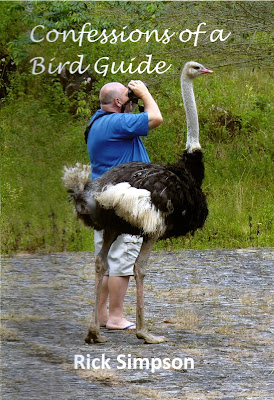 Here's how it is described on the back cover, couldn't have put it better myself:

"Confessions of a Bird Guide is a witty, candid account of Rick Simpson's adventures in birding and a life that has taken him from England to Brazil and back again. Charting his journey from young boy in a makeshift hide, through the twitching years to becoming a bird guide in Brazil and eventually setting up the Ubatuba birdwatching centre, it is a tale full of highs and lows, of buff-throated purpletufts and black-hooded antwrens, of friendship and subterfuge that is sure to strike a chord with birders everywhere."

On the 4th of April I will be giving a talk to the Bucks Bird Club at the Memorial Hall, Manor Road, Wendover HP22 6HF where I will talk about my experiences as a bird guide in Brazil, it will be your chance to get hold of one of the very first copies of this literary masterpiece to go on sale so come and see us!

We have written and produced this book in the hope that we will be able to use it to raise some funds to support the Wader Quest project. So whether you like reading books, couldn't care less what has happened to me in my insignificant little life or even think that I am a complete pillock, I implore you to buy a copy even if you only use it to fuel your stove. Buying the book is supporting Wader Quest and therefore the Spoon-billed sandpiper.

Elis and I have decided, in the name of Wader Quest, to put (more of) our money where our mouths are and have committed to being BirdLife International Species Champions as part of the BirdLife Preventing Extinctions Programme.

Elis and I are really happy to be supporting BirdLife with their work on all globally threatened species (Critically Endangered, Endangered and Vulnerable).

Of the critically endangered species of wader in the world we have only seen two so far and hope to be seeing one more later this year, however realistically we have little chance of seeing any more in this first year of Wader Quest. Javan Lapwing, Eskimo Curlew and Slender-billed Curlew are all thought to be extinct, Jerdon's Courser has gone off the radar and the last species on the list, St. Helena's Plover, we will definitely make the effort go and see one day, but it is doubtful we will get funding help, so probably not this year.

The first of the two species we have seen is Spoon-billed Sandpiper which we saw last November just after Wader Quest started. We saw three or possibly four birds in total and spent many happy hours in their company at Pak Thale in Thailand.

The second species is Sociable Lapwing. I saw my first of these at Dartford in Kent in March of 1985, my second was at Welney in October 1990 and my third in Chatteris in 1991. I don't really expect that we'll be blessed with any more in the UK any time soon as their numbers have fallen significantly hence their status as Critically Endangered; we can but hope. During Wader Quest we saw them on the Pivot Fields of Dubai in November of 2012. There were four birds present.


This is the only other hopeful for us, the Black Stilt. This bird has stubbornly resisted attempts to build a strong population, one of the problems facing it is interbreeding with White-headed Stilts in its New Zealand home.

What a disastrous few days were having weather wise, here we are officially in spring and the snow just keeps coming. A week ago this was the scene in our garden.

A few days later it was bright and sunny and we had a Carrion Crow come to the food that we place by the back door on the step, he didn't seem too concerned that I was just inside watching his every move.

Then today the snow returns, the birds must be finding it tough, there have been plenty at the feeders today and the Pied Wagtails are back. They haven't visited since the last snowy spell.

There seem to be a few migrants being reported especially in the south west with swallows and martins, Ring Ouzels, Bluethroats and on Scilly a Red-rumped Swallow and incredibly a Common Swift. The first Little Ringed Plovers are coming through and the first Stone Curlew has been seen on the Isle of Wight.

Most of these birds will not long ago have forged their way across the scorching north African region only to find themselves caught up in near Arctic conditions, poor little sods. We'll be chucking out extra portions tomorrow again in the hope of helping our local birds through these next few days.

Elis and I had a trip out to the RSPB HQ at Sandy to buy some food for the birds, whilst there we had a stroll down to the first hide to see what was about. The best bird for us was a lovely Stock Dove that strode around on the floor under the feeders until a Woodpigeon came down and chased it off.

There was a good variety at the feeders with Siskin and Redpoll joining the usual tits.


Coal Tit is a bird that we don't get at home so it was good to see them.

Elis also took shots of other common birds that came to visit, it's amazing how we take these great birds for granted as we see them so often.

We then returned to the car park and spent a short time watching the feeders there. We saw a huge flock of Siskins and to my delight a quartet of Bramblings. I really love these birds.

There was also a Nuthatch that came down the tree, took a morsel from the ground and then disappeared up the tree again.


Yesterday Elis and I visited Lemsford Springs Nature reserve a Herts and Middx Trust reserve that I used to frequent when I lived in Hatfield.

The reason for our visit was to look for a Jack Snipe that had been reported there the day before, sadly we were unlucky in this respect, but we did see 5 Green Sandpipers while we were looking.

There were also 3 Common Snipe.

The cress beds also held a Grey Wagtail, a pair of Teal, a Moorhen, a Little Egret a Grey Heron and a Water Rail, the last two of which I only saw in flight.

In the water warden Barry Trevis unearthed a couple of bullhead fish from under a stone.

Barry showed us around the reserve and we were joined on our walk by a young volunteer by the name of Drew. He and Barry discussed birds seen and work to be done as we walked about, made me quite tired just listening to them. It is really good to see young people getting involved in this way, it gives one hope for the future of conservation.


If you want to know a good site for Stock Dove, well you could do a lot worse than Lemsford, we saw at least two pairs.

Lemsford is open free to members of the trust but non members can visit by prior arrangement with Barry (phone number on the website http://www.lemsfordonline.co.uk/springsHome.html). Non members are requested to make a donation towards the running costs of the reserve.

Enjoying the return of the Reed Bunting in the sunshine, I was gazing out of the window when in the sky above the fields at the back of the houses opposite I saw a flock of Black-headed Gulls floating about. I knew from recent sightings in the field that this flock had at least one Common Gull in it. I had been tempted the other day to put this species on the list as I watched one fly over where our house is and had we been at home we would most definitely been able to see it, however I was that far away that I couldn't even see the end of our road at the time, so didn't count it expecting to see one one day.

Today was that day, as I drew my bins up I focussed on a first winter common Gull, then in the spiralling flock I found at least three adult birds, so the garden list advances by one more.

In the garden yesterday we planted a rowan, a hazel and a silver birch tree, one of each. One of the reasons that our garden has struggled to attract birds has been the lack of trees both in and around our house, this planting spree is designed to address that, if not now, in the future.

It is now 30 years since the slogan "Plant a tree in 83, plant some more in 84" was first coined and it is every bit as important now as it was then, perhaps more so.

Interesting to hear that some early spring migrants have arrived in the form of Wheatears at the same time the number of Blackbirds in the garden seems to have taken a dip, I have seen no more than three (recently as many a 7) males together and two females (recently 3) at any one time today.

Also today two Robins came to the garden for the first time. there seemed to be no angst between them and they came from the same diection, fed at the same time although not exactly together and left at the sam time in the same direction... a pair?

I was watching the telly this afternoon (having a break from writing) when the phone rang. In order not to disturb Elis who was also watching I took the phone call in the office. As I sat talking to my father, for it was he who had rung, I looked out at the bird table and there was a Reed Bunting! 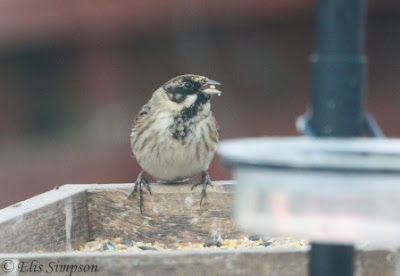 I called Elis and she got a couple of record shots of it on the table, it then flew to the washing line, 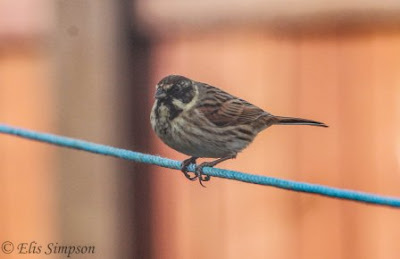 and from there onto the seed tray. 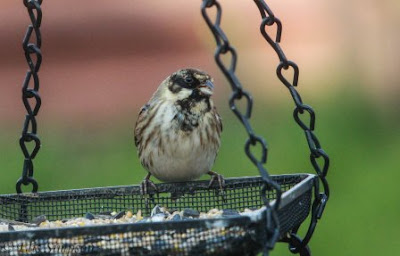 Eventually it went to the ground to feed and there it remained for some 15 minutes. 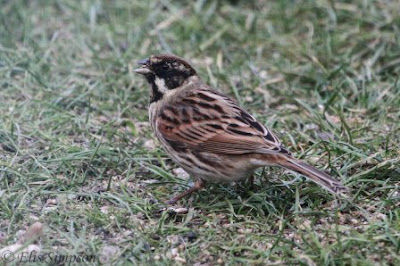 We have also been treated to repeat performances from the Siskins from time to time. Mostly a male on its own but sometimes a female accompanies him or another male.