Back in Ubatuba, Brazil.

Returning to Ubatuba presented us with a mixture of emotions, we really enjoyed seeing the scenery again, but some of the not so nice memories also returned to us, but largely, thanks to old friends, we were able to ignore them.

﻿
One of the highlights was a visit to Ubatumirim, one of my favourite birding spots in Ubatuba. We went there primarily to look for Collared Plover which we found on the beach as expected.

A little later though, as we were watching a male Rufous-capped Antshrike singing away we heard a familiar sound...

we were stunned to hear the calls of Brown-backed Parrotlets in flight!!! Looking up we saw 11, they flew in a large circle around us allowing us to make a sound recording of their calls and Elis managed, despite their height to get a recognisable record shot of them.

A little later we heard and saw them again, this time flying at a greater height. We finished off our visit with some spectacular views of a Lesser Yellow-headed Vulture.

Off to Brazil and Peru

Off to Brazil and Peru now doing Wader Quest, no doubt we will encounter some birds that are not waders to keep the blog updated, tanagers, hummers, antbirds all very exciting, some familiar old friends in Brazil and some exciting new ones in Peru where we will be guided by old freind Renzo Zeppelli.

Confessions of a Bird Guide reprint. 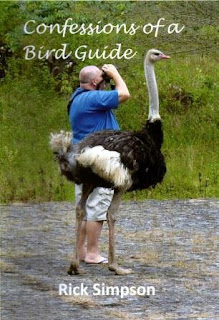 In response to the flood of enquiries we received from people not being able to get hold of a copy of my book Confessions of a Bird Guide we have now made it available again.

Same conditions as before; if you just want a really good read (or something to stop the table wobbling) go direct to Lulu and buy it from there.

If on the other hand you want a personalised copy, then send me an email and I'll send you a signed copy with whatever dedication you wish, but you'll need to add p+p (£1.40 2nd class UK, other destinations on request) to the price of £7.99 I'm afraid.

For the record, the cover photo is not a montage, but to get the full story you'll have to read the book!
Postado por Rick Simpson Birding às 20:24 No comments:

Anyone who has dreamed of going to Texas will certainly have decided springtime is best and they will also have decided that High Island is a must-visit destination with the mouthwatering lure of Nearctic warblers lighting up the trees.

So when Elis and I discovered that we would be passing the end of the road on our Wader Quest journey from Galveston to Cameron Parish, Louisiana, we felt we just had to stop by and see what all the fuss was about! So on the 27th of April we stopped at Boy Scout Woods in High Island on a day that, we were told, was going to be a 'good' one with plenty of birds about. 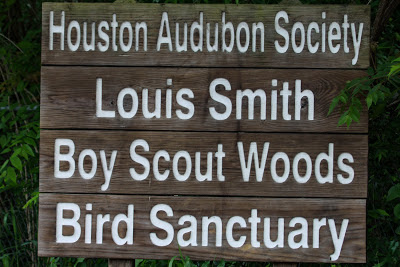 We parked the car and as we walked to the centre we were stopped by a chap who asked "Is your name Simpson?" Naturally I confirmed this and he introduced himself as Gerald Mueller, one of our facebook friends. It was good to shake his hand after so much toing and froing and admiring of each other's photographs on the facebook pages.

We spent a little time wandering around the sanctuary with Gerald and enjoyed the birds, the best spot by far though was a bottle-brush bush just outside the sanctuary gate in a private garden! In this I saw my first ever Prothonotary Warbler, some Tennessee Warblers and a lovely Bay-breasted Warbler.

In addition we had a female Summer Tanager, Orchard Orioles and a White-crowned Sparrow in a tree next to the bottle-brush.

Our stay at High Island was all too short, but we certainly got a feel for the place and could just imagine what it would be like on one of the big fall-out days, even on this day, which was considered merely 'good' there were birds in every tree and movement everywhere, but apparently this was not unusual according to the regulars, "Y'all should be here on a fall-out day!" one enthusiastic local birder told us happily.


As we drove away we came across this pair of Eastern Kingbirds but couldn't decide if they were being aggressive or courting, such is the course of true love I suppose!

Some interesting birds from Louisiana and Texas

As part of our Wader Quest Elis and I found ourselves in Louisiana and Texas. Now everyone knows that birding the Gulf coast in April means you'll see much more than shorebirds, and so it proved for us too. This Common Nighthawk was on a fence post along the beach in Cameron Parish.

I placed a shot of this Painted Bunting as one of my favourites in the right column of this blog, here's another of this gaudy little stunner.

My first Yellow-billed Cuckoo in the USA, I have seen several Black-billed before but not this species, although I had previously seen both in the UK, on the Isles of Scilly to be precise.

We saw a good number of these and also Indigo Buntings, sometimes there was so much colour in a tree that it looked like Christmas had come early, these blue birds, yellow warblers, red tanagers and green vireos, wonderful birding.

Mixed in with the grackles and Red-winged Blackbirds we came across a few Yellow-headed Blackbirds, our first was near Welsh where Steve Cardiff and Donna Dittman took us to look for waders, but it was Elis that spotted it first that time.

Not very rare and rather widespread, it is still always good to see the Purple Martins, the males, when they catch the light are glorious.

Another hirundine and a tick for me, these Cave Swallows would have eluded us if it had not been for Steve and Donna.

Wood Duck is contender for the most beautiful duck in the world (possibly being pipped at the post by Mandarin), we only saw this male and its mate during the whole trip.