We visited Pucusana in order to see Blackish Oystercatcher for Wader Quest which we were fortunate enough to do, but by far and away the most common bird at the small fishing port was Inca Tern. This is simply an astounding looking bird and one that we really were looking forward to seeing. We had no idea they were so common and easy to see!

Here is the Blackish Oystercatcher.

Two interesting and attractive cormorants were seen at this spot too, the Guanay Cormorant,

and the Red-legged Cormorant, this one was a real cracker.

There were loads of Peruvian Boobies about, but among them were a number of juvenile Blue-footed Boobies.

There were of course plenty of Peruvian Pelecans too. These birds, like Brown Pelican the closely related species further north, are really quite tame and approachable, sitting on docks or floating past your boat as this one did.

The real icing on the cake came when we left the port and went up the hill behind to overlook the sea below. It was here that we saw several Humboldt Penguins.


While we were waiting for the penguins to appear we were treated to stunning views of a real speciality of the region, a passerine that in endemic to Peru and is restricted to rocky coastal habitat, the Surf Cinclodes..

While in Lima we visited the Villa Marshes. Well, we didn't actually visit the marshes as such, just a lagoon behind the beach there. It was quite dramatic with heavy breakers crashing on the beach the spray from which was creating a haze across the scene.

The first sight that we came across was dozens of Inca Terns bathing in the fresh water.

In among them were several Grey Gulls, migrants from the south.

On the gull theme there was a few Franklin's Gulls dotted among the many Belcher's and Kelp Gulls.


Belcher's Gull is interesting as it is the only gull that I know of that only has a black head in winter plumage.


On the lagoon itself there were some interesting birds such as the Andean Coot, Great Grebe (just look at that bill), Ruddy Ducks (the black-headed form) and Cinnamon Teal.

As we were leaving we came across this smart looking Long-tailed Mockingbird.

Back in São Paulo Elis and I took the opportunity to go and visit one of our other friends Milena Corbo who we missed in Campinas. She was spending some time in São Bernardo on family business so we popped down to see her to get her to sign the books she helped to write, which she duly did for us. I had left her copy of Confessions of a Bird Guide with Carlos and Viviane in Campinas, just in case we didn't get together.

We had a splendid time together catching up with everything but all too soon we had to return to São Paulo to sort out some bank business.

And, just to prove that a sprawling metropolis, in this case São Paulo, can look attractive...
Plus, as this is a bird watching blog, here are a couple of Brazilian antbirds taken in Ubatuba, firstly Spot-backed Antshrike,
secondly Ferruginous Antbird.

Plus some unknown (to me) species of lizard, also in Brazil.

We are currently in Brazil as part of our Wader Quest and visited Pirapora in order to see the Pied Lapwings there. It was there that we came across our first new bird, Stripe-necked Tody-Tyrant. This bird is right on the edge of its range here, if not slightly beyond it!


The second new bird was along the road to Brasilia in Goias where Elis spotted these Yellow-faced Parrots by the side of the road.

In Brasilia we visited the National Park and I got another lifer there in the form of Ochre-cheeked Spinetail.

Elis got a fourth lifer there gripping back Grey-headed Tanager which I had previously seen at Serra do Cipo.

On our way back to São Paulo from Minas Gerais, we decided to stop over and visit Carlos Henrique and Viviane im Campinas. Carlos is a guide that has helped me out many a time with clients when I have been double-booked and since leaving Brazil. he is an excellent guide and I thoroughly recommend his services if you are hoping to bird in south-east Brazil.

﻿
The reason for our visit, apart from seeing old friends, was to exchange books. I presented him with a copy of Confessions of a Bird Guide and he presented me with a copy of Aves do Campus da Unicamp e Arredores which he had co-authored with others including our friends Arthur Macarrão and Milena Corbo.

He also presented me with a copy of a book written by a series of authors Monte Mor, a vida às margens do Capivari about the wildlife to be found in the Capivari region. Arthur and Milena had written the section about birds and it was she that had left the book with Carlos to present to us. 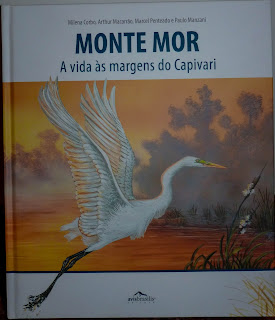 present to us. Both of these books have been published by Avis Brasilis which is run by another friend, the artist Tomas Sigrist.

Our time with this charming couple was all too short and we had to return to São Paulo the next day, but we had a great evening catching up and thank Carlos and Viviane for their generous hospitality.

Visiting Peru as part of our Wader Quest gave us ample opportunity for general birding of course. Our very first day in Lima with Renzo Zeppilli gave us plenty to look at. The first bird we saw I recognised immediately as White-winged Dove only to be disabused of this idea and was informed that it was a West Peruvian Dove!

A gull flew over and also looked familiar, less confident now I suggested Kelp Gull and was relieved to find this time I was correct, but moments later a black-backed gull with a black head flew past, this then was surely a Belcher's Gull? Renzo confirmed my ID.

There were also other familiar birds about, Black Vultures soared around the skyscrapers, Tropical Kingbird, Eared Dove, Bananaquit, Southern Beardless Tyrannulet and Southern House Wren were all seen. Another familiar looking bird was Groove-billed Ani which looked like a small version of smooth-billed.

The most vociferous bird around is the Scrub Blackbird. Its song sounds like some sort of futuristic weapon from some playstation game, or a rather drunk R2D2 from Star Wars. It is a common bird to be heard and seen in every one of the many planted squares and gardens in the city.

The only hummingbird of the city is the Amazilia Hummingbird, a lovely rufous and green bird that feeds along the many hibiscous hedges and bushes.

Vermilion Flycatchers are also a bird of the city streets, they can be seen flycatching from trees and aerials, but the interesting thing about some of them is that they are of the local form which has an all dusky plumage.

There are two forms of the Blue-grey Tanager too, both occur in Lima, but both are introduced.