Elis' photo today is one of my favourites, the Orange-eyed Thornbird. I just loved the fierce-looking, penetrating eyes. It can be a bit of a skulker at times, but it wasn't difficult to find as its song is distinctive and strident. It is a Brazilian endemic species of a family that is exclusively Neotropical, added to which it is a stunning bird to see, not surprisingly it was very popular with my clients. 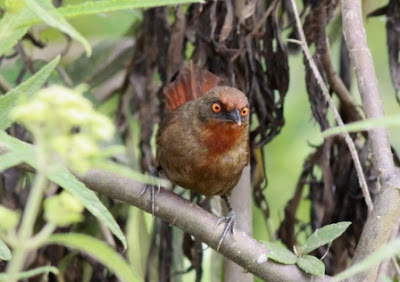 This bird and its sister species the Orange-breasted Thornbird have caused a certain amount of confusion in their time due to their common English and scientific names.

Some considered that there were two distinct species and argued that they were living side by side in some areas. This was first documented by our friend Jeremy Minns when he recorded the two forms singing at the same site simultaneously.

So it was that the two forms were split into Red-eyed and Orange-eyed Thornbird. The confusion came because of the scientific names attributed to each; Red-eyed became P. ferrugineigula (meaning roughly ferruginous- throated) and Orange eyed remained P. erythrophthalmus (meaning... red-eyed!)

There was much confusion over this with some authorities such as the CBRO (Brazilian list keepers) getting it wrong for some time.

Eventually the powers that be (namely SACC South American Classification Committee) decided to change the English name of the Red-eyed to Orange-breasted, reflecting not just its plumage but also its scientific name more accurately.
Postado por Rick Simpson Birding às 08:22