Learning that a Squacco Heron was in residence at Welney WWT spurred me into a Sunday afternoon outing to try and see it. Elis and I drove up to Welney and made our way to the hide. As we arrived there was a mass exodus, which in my experience means the bird has been seen well by all and now has disappeared. I was not wrong. Three others were in the hide when we entered, a couple who had seen the bird and were just packing up their things and a chap who had not seen it, like us, arriving just too late. We spent about 30 minutes hopelessly scanning the area where the bird had last been seen, then I saw Elis snap her bins to her face, at the same time the other hide occupant called that the bird had dropped into view, albeit distant and partially hidden by vegetation.

Relieved we watched the bird through the scope, but were unable to get any snaps of it as it remained too distant. Elis got some good scope views, although I had to content myself with predominantly head and neck only views.

Still, at least we saw it.

Later on as the sun was setting Elis went for a walk in Bury Field while I vegetated on the couch in front of the telly. Big mistake, she came across this Barn Owl hunting, doh!

After all this excitement Elis returned home to grip me off by the light of the silvery moon! 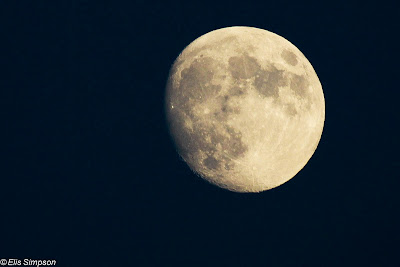