﻿﻿﻿While in Connecticut I am staying with my brother, Andy, who was responsible for me being interested in birds in the first place, he has since lapsed, but is now becoming a 'born again' birder and came out with me to see some of the local birds that he hadn't seen at his feeders.
﻿ Among the birds that were new to him were Yellow Warbler and Baltimore Oriole, and Elis found a stonking Prairie Warbler.
After this my brother went off for a spot of fly-fishing in a beautiful spot where water tumbled over rocks and Elis' arty side came to the fore. 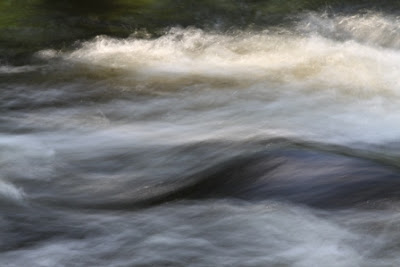 Aparently this is a relaxing pastime, but being up to your gonads in freezing water is not my idea of fun.
I learnt something about fly-fishing, when your line gets snagged in a tree, you simply wade over and retreive it, no problem!
As my brother fished away to his heart's content, Elis and I birded along the river, here we found some interesting birds with Eastern Phoebe, Chimney Swift, Cedar Waxwing and Red-bellied Woodpecker being added to Elis' life list.

My sister in law, Catarina, also a Brazilian, has no interest whatsoever in birds, but was happy to cart Elis and me around to show us some of the best birding places near to their home, lunch by the beach USA style, not quite the bikini and shorts style of Brazil at this time of year.
Meanwhile back at the feeders a pair of House Finches brought their youngster to be fed, both the male and female fed their squawking offspring.
The feeders were busy; with the House Finch pair and a pair of American Goldfinches it was full house.
When space allowed a White-breasted Nuthatch put in brief appearances, mostly nabbing a sunflower seed and flying off to eat it elsewhere.
This splendid Northern Cardinal enjoys the facilities too from time to time.
Chipping Sparrows visit the feeder, but also pick up fallen seed on the decking,
often in the company of this charming little fellow, a Chipmunk.