More blackbirds than you can bake in a pie!

I woke up this morning to the sound of a Blackbird chacking outside in the garden. As I lay in my warm and cosy bed I began to get pangs of guilt. It was as though the bird was chiding me for my selfishness, goading me into action. Wearily I arose from my pit, bracing myself as I did so against the cold air, shivering slightly I waddled over to the window and pulled back a corner of the curtain. There, spread out across the lawn like a box of chocolate biscuits spilled on a fluffy white carpet were not one but THIRTY ONE Blackbirds. News had spread about our garden it seems and the entire local population had come for their grub. Sadly it was still too dark to take a photo; flash was not an option due to the glass in the window. Had we opened the window  they would have all flown off and I would have frozen my balls (as in brass monkeys) off for no reason.

During the day birds come and go, studies have shown that individuals rarely stay put in one spot and have a circuit of feeding stations (try telling that to our resident Fieldfares) thus they are never all in your garden at the same time, misleading you into thinking you have less individual customers than in fact you do. You may see a good percentage of them causing you to underestimate the number of individuals you are actually supporting. Obviously overnight all of our visitors had been planning their strategy for surviving the next day, and they all had the same bright idea; 'Let's go and wake the Simpsons up, they're a soft touch, always loads to eat there!' in much the same way that I carefully select a 'greasy spoon' for a fry-up to set me up for a long, hard day ahead. 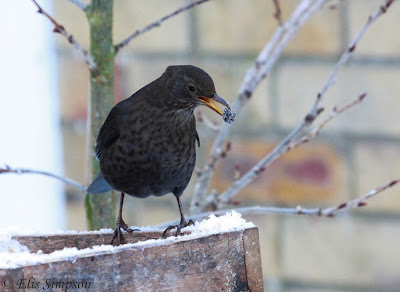 Due to the number of bird visitors we have had we found our food stock depleted. We put out what we had left and then set off to a well known supermarket to buy, in addition to our own requirements: apples (40); bread (four loaves); mixed dried fruit (4 packets), after all 'every little helps'. We then went to the garden centre and bought: a hundredweight of mixed bird seed; a million meal-worms; a bucket with more fat balls than you can find in 3 Rugby Union teams (including subs); enough suet blocks to build a house; my own weight in sunflower kernels! (OK I may have exaggerated slightly). Fortunately we still had a sufficient supply of nijer seeds and peanuts, so the total bill, including the supermarket, remained under 200 smackers... just! A least the water is free... no, wait a minute, the water butt is frozen, we have to use tap water. Not free then but relatively cheap even so, considering the small quantities involved (less than the amount of beer it takes to be over the limit).


We now have two resident Fieldfares, one out the front and the other out the back. They are very argumentative for flocking birds (if you'll excuse the expression) and need the house between them to avoid fights. Every now and then a flock if their kind will descend, only small numbers, three or four at most, and the resident birds will take a break from beating the hell out of the Blackbirds and see them off. It turns out Fieldfare are not a caring, sharing sort of a bird.

Other highlights today (highlights being relative, I doubt this will excite many folk) were a Rook in the garden and a Dunnock.

The number of Starlings has apparently risen with a maximum count at of 28 out the back and 16 out the front simultaneously; total 44.

The two Pied Wagtails we have are also rather belligerent and they cannot co-exist, one will always chase the other out of the garden if they both appear at the same time. This is happening more frequently now their stays are getting more and more prolonged in nature.


Elis has been heroic taking a spade to the snow on the lawn clearing a patch so that the Starlings can probe about in it looking for all the world like a small flock of waders (Obsessed? Me? Nahh!). Elis noted the way they insert their beak and then force it open, presumably opening up a gap from which they can pluck a tasty morsel should they find it. She also cleared a section of the flower bed exposing bare earth that has been permanently poked at by a succession of Blackbirds.

Water is still very popular but I still see some birds taking beaks full of snow from time to time. I'm not really sure why they would choose to do this as the energy involved in melting the snow would have to be replenished somehow.

We had a couple of brief visits from a Long-tailed Tit and a Blue Tit. The tits must have somewhere else that they are feeding as they only stop here for a very short time. I expected to see more of them to be honest, and a little disappointed we don't get more visits from these little beauties. 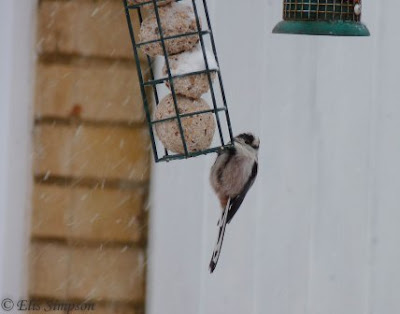 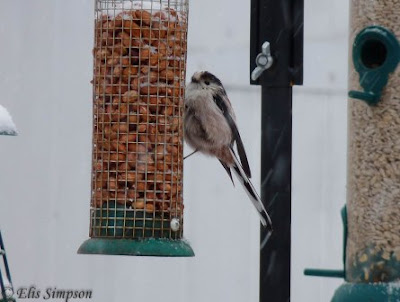 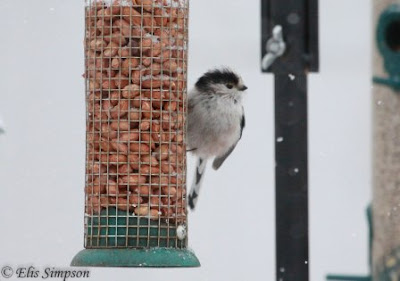 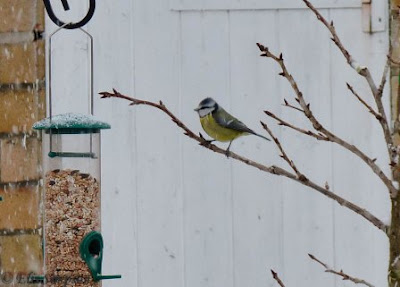 As I sit here now in the gathering gloom, the day is finishing much as it started with a albeit smaller number (10) of blackbirds hopping around gathering some last minute calories and chacking quietly to themselves. The Starlings have all gone off to some communal roost, to whirl around in their hundreds, if not thousands before turning in for the night, creating an enthralling spectacle; another trait that adds weight to the 'honorary wader' claim.

So there you have it, let's see what tomorrow brings. Can't wait, this is better than... well, you know! (Not true, but you get my point I'm sure.)