Finally my paper is published!

Years of blood, sweat and tears have gone into the writing of a paper about the birds of Ubatuba. All the records I kept over the five years being brought together, hours of sifting through records, photos and sound recordings on the internet and still more hours in the museum searching records and inspecting specimens. It was published by the Museu de Zoologia da Universidade de São Paulo (MZUSP).
﻿
Enjoyed every minute of it of course. Naturally I didn't do it alone, I had the help and support of Elis throughout and the thing finally took shape when we were joined by Vagner, a student at the University Museum. It was his scientific training and experience with scientific writing protocol that gave the work any chance of being accepted by the learned folk at the museum, and for that reason I will always be greatly indebted to him. There is a downloadable pdf on the Publications page of this site should you be interested. 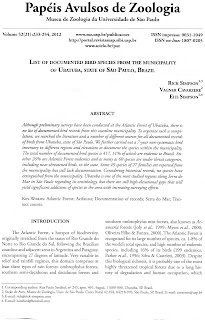 I embarked on this research because there was a rather dodgy list that was being bandied around around the time of my arrival in Ubatuba. It had something like a hundred more species on it than could be properly documented,  many were extremely unlikely and some were even Amazonian endemics.
Try as I might to persuade the author to remove some of the records, he was adamant that the political value of having a high list far outwieghed any concern that it was actually not worth the paper it was written on.
He and another local chap tried to create a web based list too, it followed the original dodgy list by and large, they even put my name to it, it may still be there for all I know, I haven't logged on to it for a year or so. I decided not be involved with it in the end, not just because it was largely fictional, but also because every time I did try to make a contribution it was vetoed by the author of the original list. Democracy in action; I don't think so!
I thought that Ubatuba deserved better service in terms of literature available on its avifauna, after all it is a rather special place. A good friend who runs a small natural history museum in Brazil once commented to me that it was a crying shame that such a wonderful place with so much potential is left in the hands of such incompetent amateurs. I can't help but agree. If there were some half decent observers with a good communication network, I reckon loads of goodies would be found, and more importantly, shared (assuming the present propensity for suppression ended).