The day started well enough with one of the infrequent visits from one of the local jays, the feeders were buzzing with Blue and Great Tits and a small gang of greenfinches squabbled at the sunflower heart feeder.


All was well with the world but, as I was working on the Wader Quest accounts and Elis was vacuuming upstairs prior to a visit from friends, my computer went off and the sound of the vacuum cleaner emanating from above momentarily died and then started up again. My computer turned itself back on in safe mode and I was about to start a rant about electrical companies when Elis called to me from upstairs.

I went to see what she wanted and found that she had seen a swan lying in the field, under the power lines.


That swan had not been there earlier, I had just scanned for lapwings, it was evident that the bird had flown into the lines, killing itself and caused a blip in the supply. 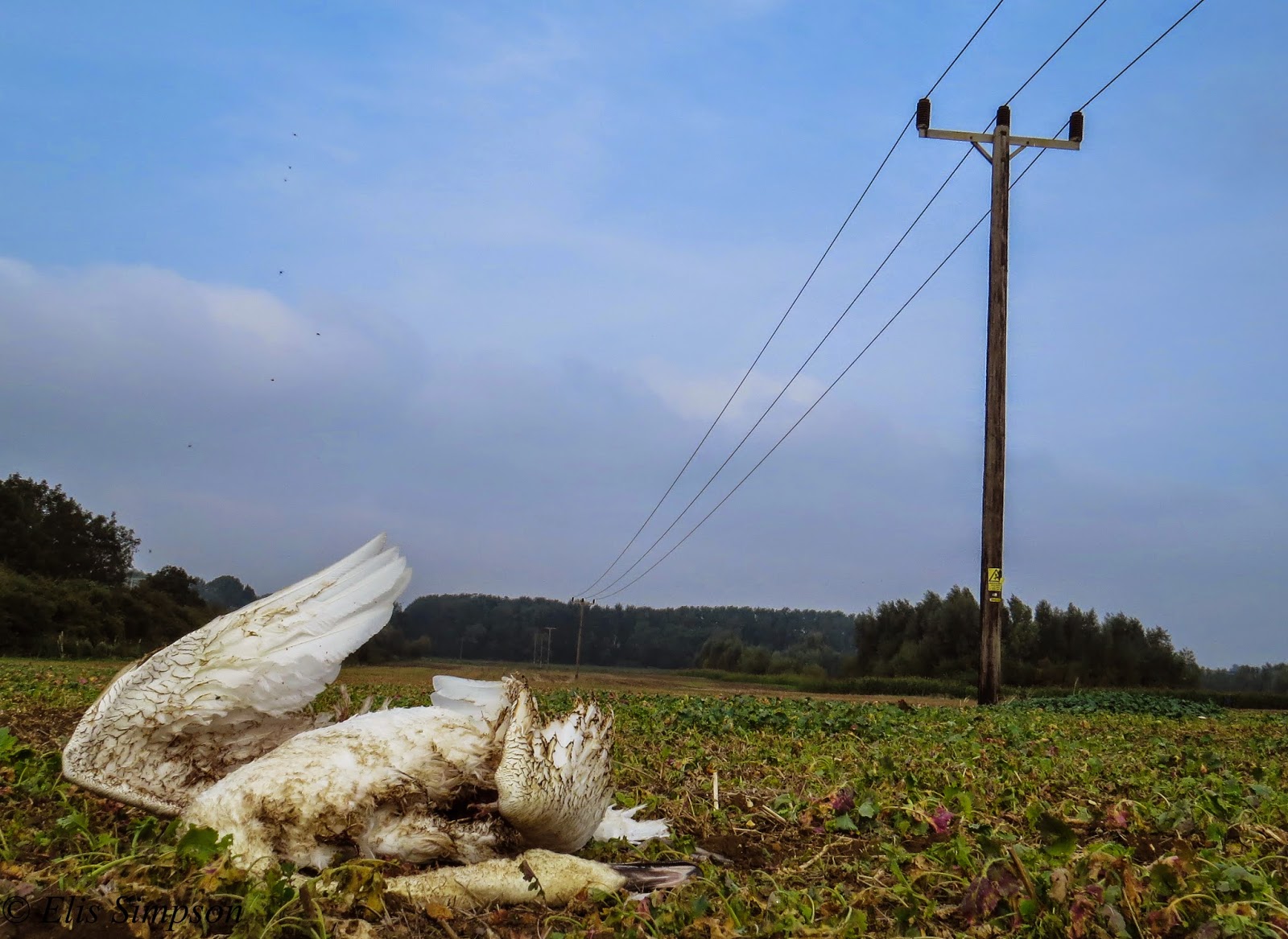 We ventured down the field and as we approached I thought that we may be mistaken, the bird looked as though it had been there some time, all dirty and its insides looked eaten away, but closer inspection reveal fresh blood oozing from a wound on the fore wing and the nostrils and the palpable smell of burnt flesh in the air, a smell that took me back for an instant to my Fire Service days. There were no rings on the bird. 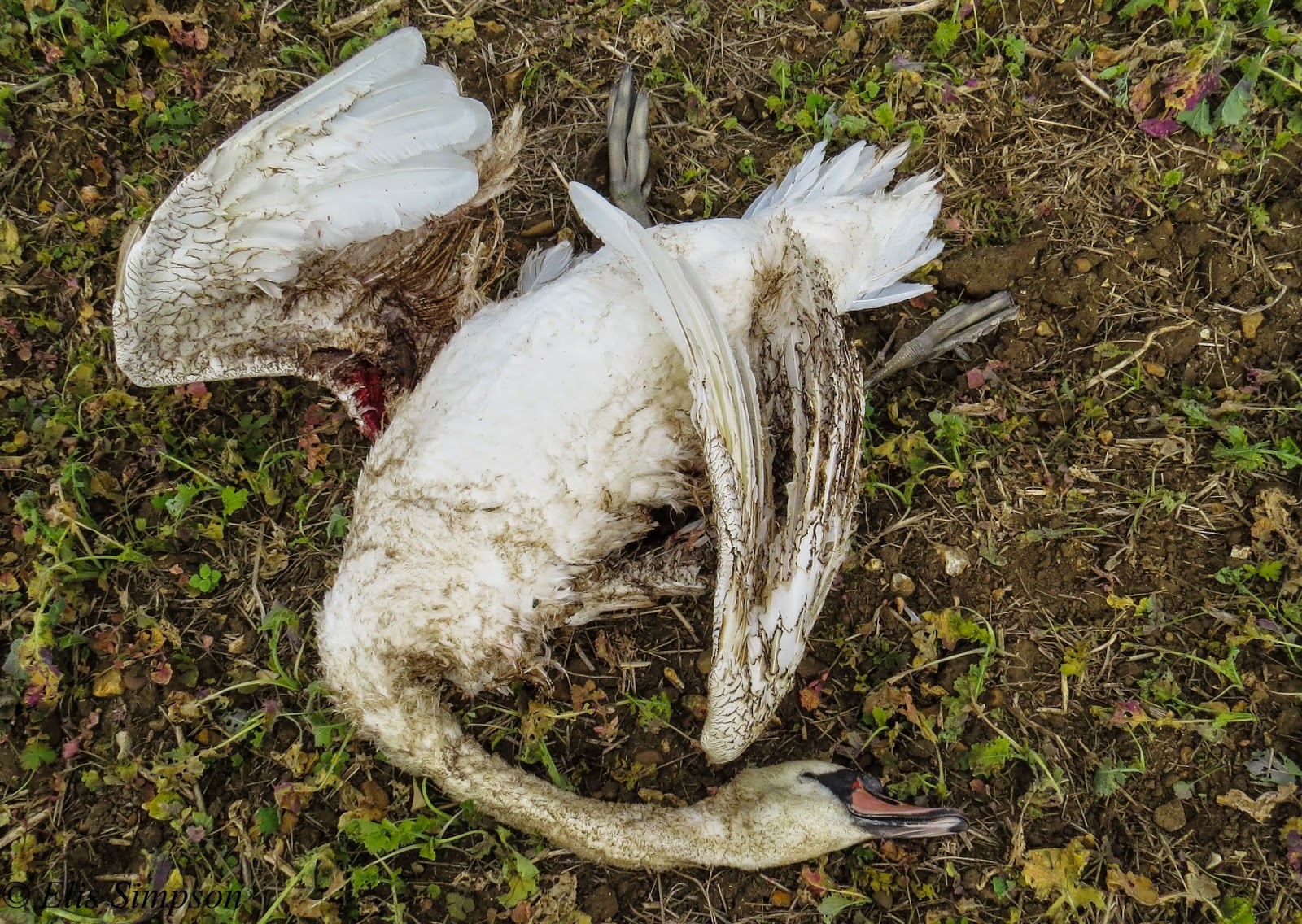 Unsure of what to do, we certainly didn't want to leave the bird in the middle of the field to look at every time we scanned for lapwings, so we carried the corpse to the hedge and left it there. Perhaps the local foxes will at least feel it is their lucky day.

A little later Elis again, spotted a buzzard sitting in the field, it was eating something right where the lapwings usually rested.


We could not see what it was so once again we traipsed down the field, this time the corpse was a female pheasant. 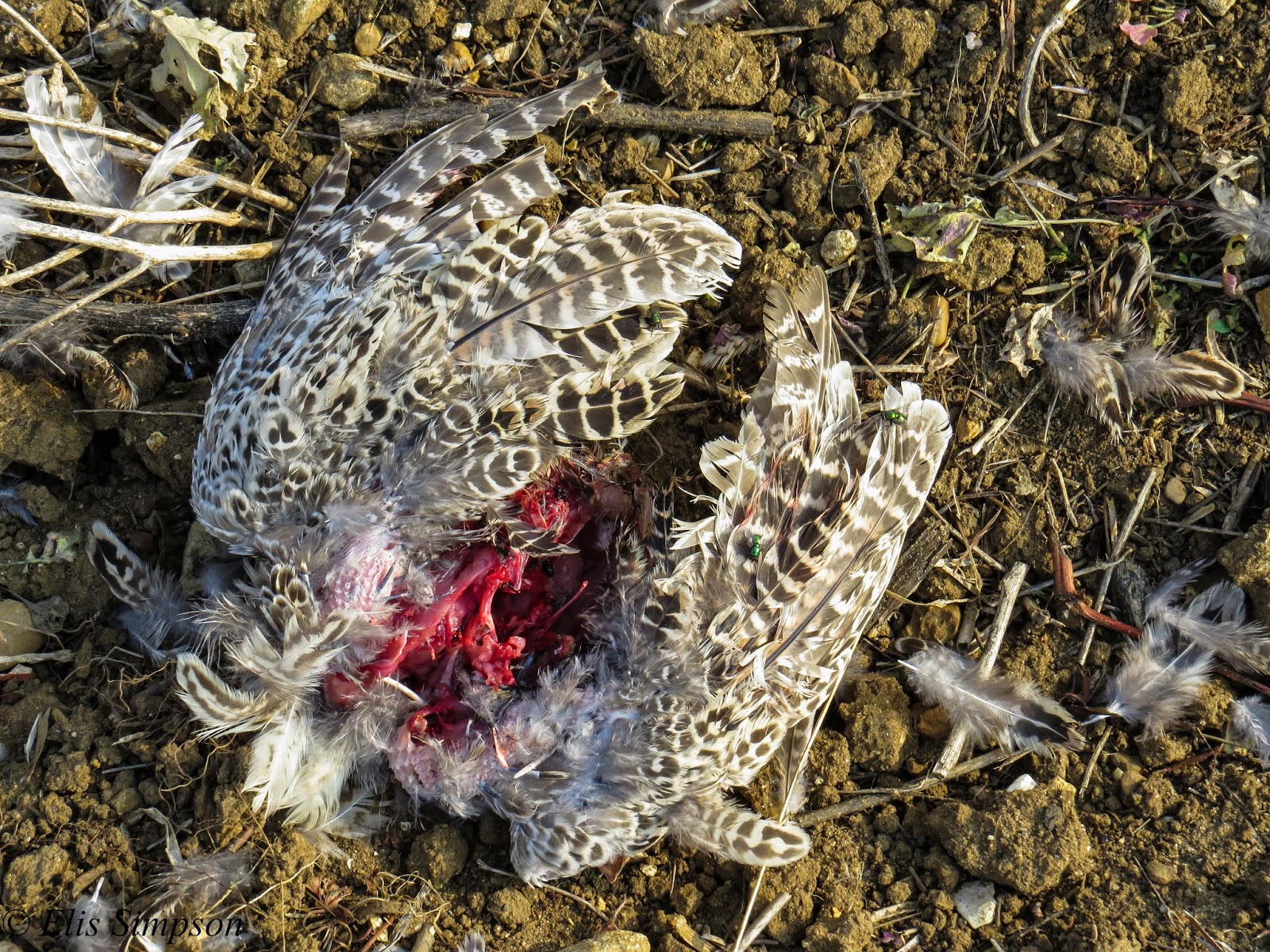 I then heard a sound that was familiar to me, but I couldn't place it at first, it was an excited short soft whistle. As we approached the lake it suddenly dawned on me that what I could hear was a wigeon or actually several of them. Panic stations! Pausing only to photograph a couple of implausibly large mushrooms, we dashed back to the house and set the scope on the lake. 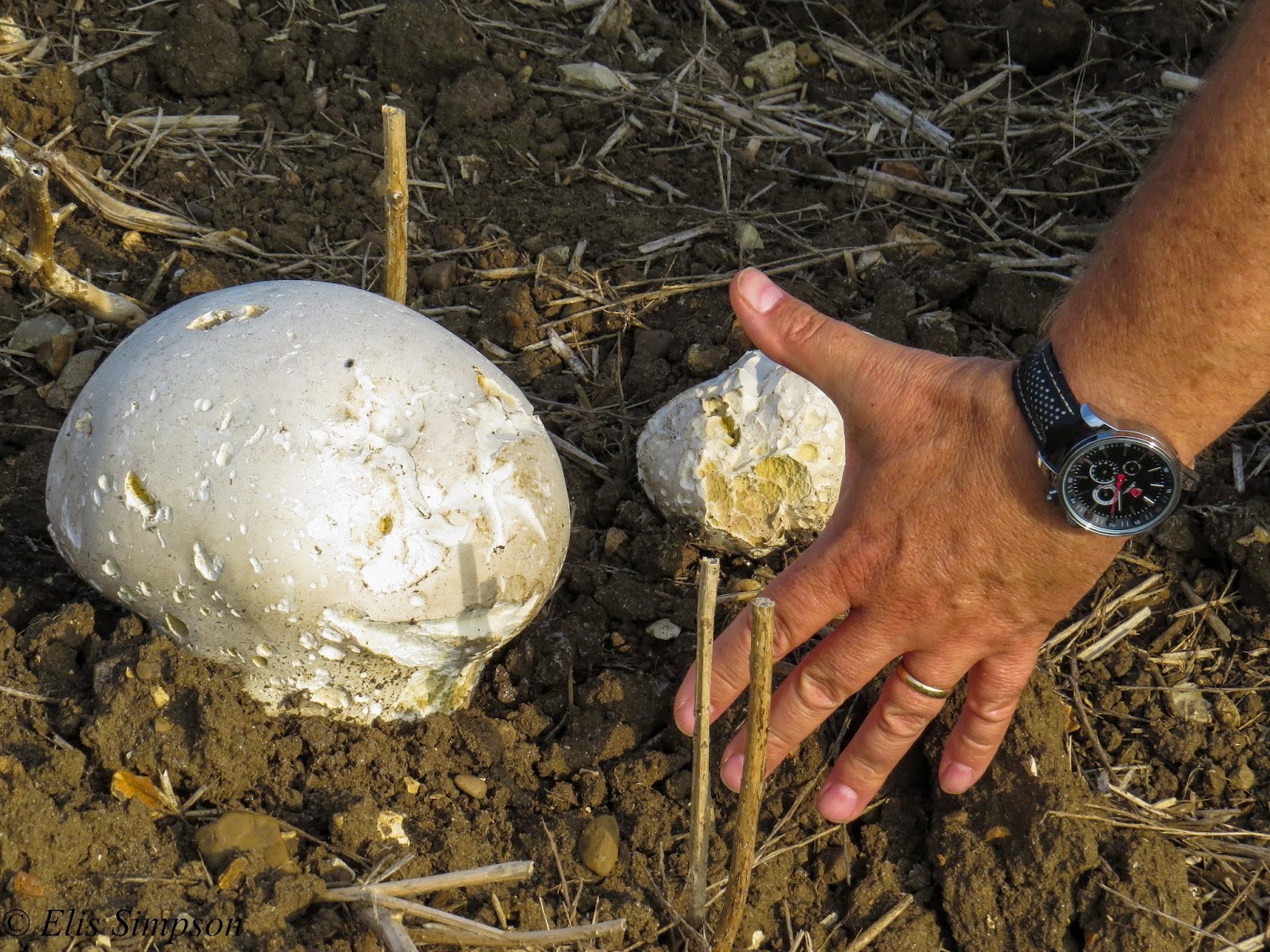 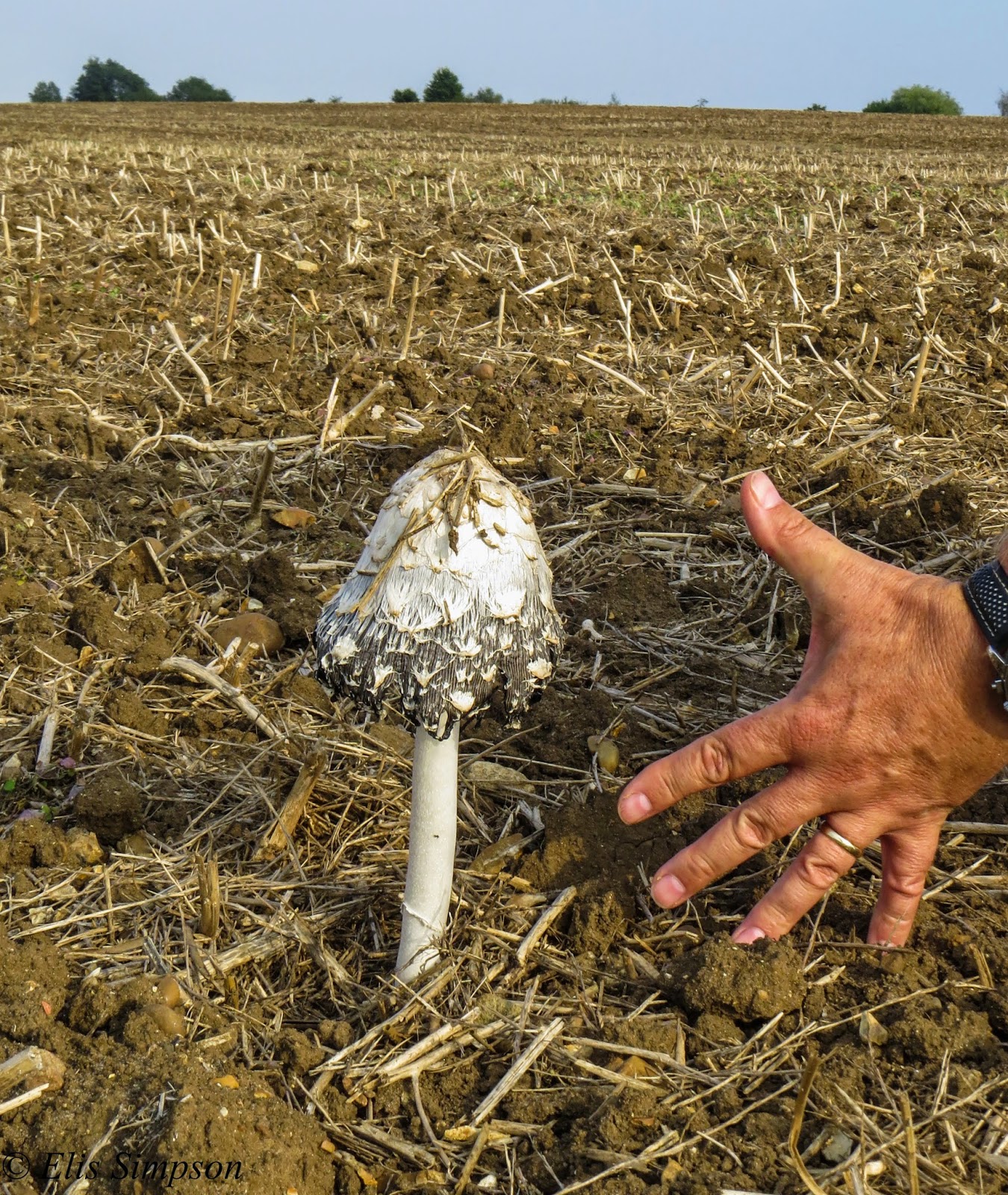 Sure enough, there they were about 10 wigeon, a cottage tick.


I spent a couple of minutes thinking that it was strange that we hadn't yet seen a teal on the lake from the house and mused about the possibility of pintail later in the winter. I was just starting to suggest another duck species, when lo and behold I found one, a gadwall.

These two ducks now bring us up to 66 on the Cottage list, which takes us one higher than our new garden list rival Frode in Norway who accepted the challenge of a garden year list competition, his 64th bird being a Marsh Tit.


A little later we saw what we feared was going to be another swan death. This bird flew along the length of the power lines at the same height and suddenly it veered towards the lnes and then thankfully it saw them and turned away again.