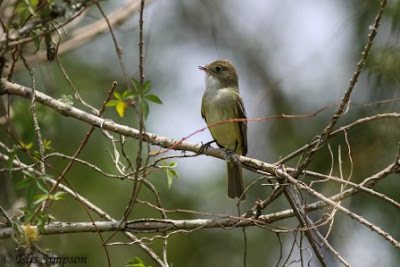 Small-billed Elaenia is a common resident in an area east of the Andes across to the Atlantic coast from just south of Buenos Aires, Argentina north to about Rio de Janeiro in Brazil. In the Austral winter it is more widespread moving north over much of South America east of the Andes but avoiding the arid north-east of Brazil. 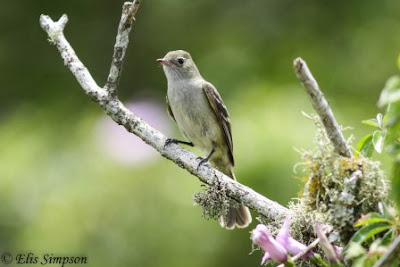 As a result although close to the edge of their range we thought that it should be fairly common in Ubatuba being a bird of forest edges and clearings of which there are plenty in the area, but it was not until December 2011 that we saw our first pair and then they were at Mogi das Cruzes between São Paulo and Ubatuba. 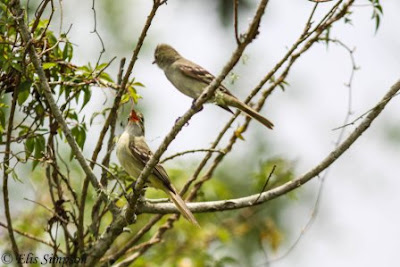 We came across this pair singing and displaying. Elaenias are notoriously difficult to identify by sight alone, so having a singing bird was a clincher for the definite identification of these birds. If you look closely at the first two photos on this page of the two individuals in this pairing you can see how different they look at different angles in different light and their plumages are well within some plumages of other species showing just how confusing this family can be and how dangerous it is to go by sight alone. (Of course they could be a hybrid pairing... now there's a thought!) The photo above you can see that the paler bird is the one to the right but the difference is less exaggerated. 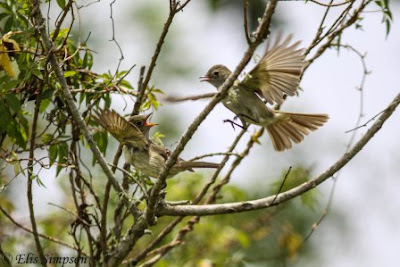 The closest looking species to Small-billed Elaenia is White-crested Elaenia. Both species have a white crown stripe, but the White-crested usually shows its crown whilst a Small-billed seldom does. In addition the books say that the former often shows only two wing bars and the latter three. In these pictures this appears to be born out but I would recommend caution in sticking rigidly to these criteria as hard and fast ID features. The third wing bar (uppermost) is barely discernable and at some angles may not be visible at all. 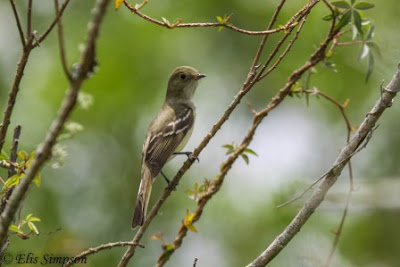 The White-crested Elaenia is also an Austral winter migrant to Brazil, so in our case it was extremely unlikely to be one of these as the date concerned was the 4th of December 2011. More circumstancial evidence can be added by the fact that White-crested are reportedly virtually silent in Brazil, so it is unlikely that you would come across a pair displaying and vocalising at that time of year. The individual in the photo below looks very like it ought to be a Lesser Elaenia, with its yellowish belly and pale throat, it is the same bird as in the first photo at the top, but there is no hint of a crest and of course it was calling and singing as Small-billed. 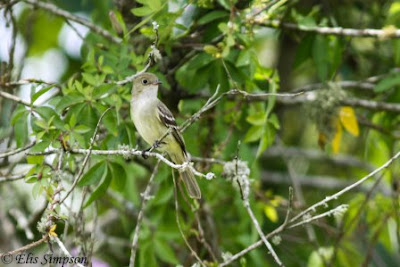 Not long after discovering this pair, on the 13th of December we came across another pair, this time in Ubatuba at Ubatumirim. We thought we had found a new species for Ubatuba and a breeding pair at that, but discovered shortly after this that they had already been seen. 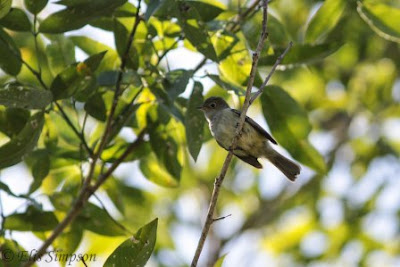 This pair had a nest and a chick. However there seemed to be something amiss with the chick, it seemed to be impaled or trapped in some way by a branch next to the nest. 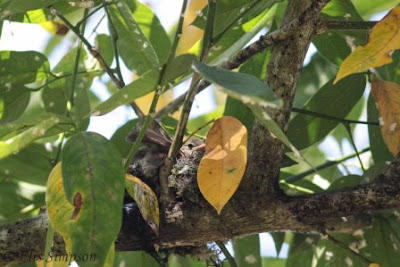 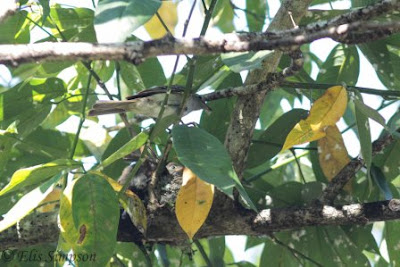 We were unable to reach the bird to assist and sadly this first record of a breeding attempt in Ubatuba failed, we saw the chick dead in the same position on our next visit. We did however see the pair still in the area and concentrating their attention on a different tree. We decided not to investigate as we didn't want to put them off if they were trying again.
Postado por Rick Simpson Birding às 17:57